I asked Renee where she would like to talk:

“Starbucks, really? That’s the best you could come up with?”

We sit on the patio, the deep green umbrella already rolled down for the night like a giant morning glory curled up to await a new dawn. Some tune I’m not familiar with is being mangled by the sub-par outdoor speakers, competing with the symphony of late summer’s insect population. I don’t want to tell her that I spent three hours obsessively pouring over Yelp reviews to find the perfect hip café, and that in the end it was too overwhelming. Starbucks was safe…familiar.

“It was easy to find,” I reply, trying to sound casual as I shove a ham & cheese croissant into my mouth, a cascade of crumbs tumbling down the front of my graphic tee.

“Why did you want to meet at night? It’s dark, I can hardly see you.”

“With five kids, you get used to having treats in the dark. It’s the only time you’re safe from greedy eyes and smacking lips.”

The croissant, an overpriced and underwhelming choice to be sure, is already gone. I brush my hands together but some of the fragments still cling to my palms, which have begun to sweat.

I clutch my Cinnamon Dulce latte in both hands, inhaling its comforting aroma. “Maybe we should just get started.”

Laura Mae: What inspired you to enter the world of writing?

R. F. Hurteau: At risk of sounding cliché (and perhaps it’s only a cliché because it’s so often true!) I think it’s in my blood. In second grade I wrote a story that began, “Wow! Up there in the sky!” and the teacher was so impressed that she typed it up, bound it in a pretty cover, and had it put in the school library. That was where my desire to share my stories was born…that was where the quest began.

L: What are you currently working on?

R: I’m not sure when people will be reading this, but at this particular moment in time I’m gearing up for next week’s launch of the first book in my series. Antiquity’s Gate: Three Days Till Dawn. I’m so excited to share it with the world! I’ve planned a rapid release of the first four books of the series, so I’m all set to put out one per month for four months. After that will be a short interlude before the last four. I’m currently working on the sixth book, and the last two are all outlined and ready to go, it’s only a matter of writing them down. And, you know. Editing, revising, editing, revising, and editing again. But let’s not get hung up on the details!

L: Are there any books or authors who inspire your work?

R: Oh gosh, there are so many. C.S. Lewis, Wynne Jones, L’Engle, Tolkien, Michael J. Sullivan, Vonnegut, Bradbury, Orson Scott Card are just a few who really inspire me and my work.

L: What has been the most challenging for you so far?

R: In the process as a whole, the biggest challenge was finding the right cover artist. My husband is deeply invested in my books, so together we had a joint vision that amounted to quite a demanding set of requirements. It actually took two years before a friend pointed us in the direction of @nushdraws, who ended up being perfect for us!

As far as writing itself, though, the biggest challenge was definitely coming to terms with the fact that if I wanted to write a very intricate series of books, I would have to hang up my “let’s see what happens!” ways and craft some kind of outline, even if it was only sticky notes on the wall of my office. And you know what? It’s a beautiful sticky note array, even if I hated doing it. It’s probably comforting to my readers to know that I know exactly what’s going to happen every step of the way, too!

L: What is your favorite writing trope? Least favorite?

R: Honestly, I am a complete sucker for a nice guy/bad boy love triangle, particularly when the bad boy wins. I haven’t written one and probably never will, but I like reading them! I also like brother-against-brother or any variation thereof.

As far as least favorite, pretty much anything involving vampires. I’m sorry! They just aren’t for me, and neither are their blood-sucking tropes.

L: Besides writing, what is it you like to do?

R: Home improvement projects. I really enjoy the rush I get from tearing something down and building something new, or learning a new skill, or trying something different. My husband & I work well together on these sorts of creative things, and have added some really neat things to our homes over the years. But I won’t expand on what, since this is supposed to be an interview about writing & I could go on for days about projects!

L: What would you say is your favorite book or series of all time? Why?

R: Michael J. Sullivan’s The Riyria Revelations. It’s one of those series I read over and over, and every time he releases something new in that universe I pounce on it. The characters speak to me, exuding everything I long for in a friend. The descriptions are beautiful, the emotions run deep, and there are so so many little details hidden throughout. No matter how many times I read them, I always catch something I never had before!

L: Are there any regrets you have or anything you wish you knew sooner?

L: In a brief statement, have you self-published or traditionally published? What was your experience?

R: I’m glad you specified brief, I’m sure most of us have a lot of feelings on this topic! I am self-published and I’m really glad I chose this route. It was absolutely the best choice for this series and I’m certainly enjoying the experience. So far, so good!

L: What are you currently reading?

R: Glazed Suspicion by Allison Pearl. The neatest part of the Twitter writing community, for me, has been meeting and interacting with authors of all different genres and in turn expanding my reading horizons!

L: What genre do you read?

R: Usually fantasy, less science fiction than I’d like but definitely some of that, too. I’m open to anything, really, I just tend to stick to my comfort zone if no one pushes me out of it. I have a real soft spot for genre-mashing, and love when aspects of all sorts of genres can be beautifully blended into each other.

L: What does a typical day of writing look like for you?

R: I have a very hard time writing in tiny spurts. Where some have the enviable ability to take 20 minutes and turn it into something beautiful, I find myself using that 20 minutes to stare into the middle distance and ponder what’s to come. So when I write, my husband is in charge of the rest of the household and I just chug away for 5, 6, 7 hours at a time. I must have coffee and silence. Everything else is just a bonus.

L: Any songs or type of music you need to listen to when you write?

R: No, I prefer silence. I can’t concentrate with music on, all I hear is the lyrics. And if it’s got no lyrics, all I hear is the tone of the music, which irritates me if it’s not the tone I’m trying to portray in any given scene. Music is too powerful! I just like quiet for writing.

L: What’s a word or phrase that people say that always irritates you?

R: There aren’t any, really. Though I do have a strange aversion to the word “beef.” Don’t ask me why. I like to eat it. I just don’t like the word.

L: Who is your favorite literary character and why?

R: Royce & Hadrian (I know you asked for one but they’re inseparable!) from The Riyria Revelations I mentioned before. A close second would be Sherlock & Watson, or Frodo & Sam (Is anyone seeing a pattern here? Haha.)

L: Where would you say you get most of your inspiration?

R: As far as the things I write about, honestly I find a lot of inspiration through television. It’s usually, but not always, sci-fi. Some of the shows in my treasure trove are Star Trek, Stargate, Fringe, Defiance, Sherlock, Merlin…all of these have so many really incredible aspects to them that I wanted to explore in my own way.

L: For aspiring writers out there, what would be the best advice you want them to know?

R: Don’t let anyone fool you—we are really all just blindly feeling our way along, figuring it out as we go. There’s no one right way to be a writer. Just write. Don’t let rules stifle your voice, but don’t let pride stifle your ability to grow. 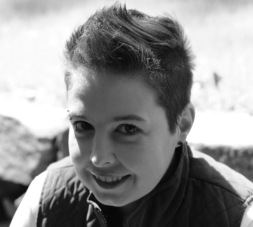 In the amount of time it takes you to read this, R.F. Hurteau will have finished yet another cup of coffee. More caffeine than human, she harnesses the powers of this magical bean juice to create stories that explore worlds unknown through the lens of that age old curiosity that drives all creatives: the human condition. She lives in New England with her husband, five kids, and an impressive array of animal friends. Her ultimate mission is to craft light, character-driven science fiction that is accessible to all, and by doing so slowly turn everyone into nerds.

Antiquity’s Gate: Three Days Till Dawn – Antiquity’s Gate forced two realities to collide—what followed tore one of them apart.
Now those who remain coexist beneath the shelter of a domed Antarctic city, held together by a tenuous peace and an increasingly dystopian hierarchy. Any hope of one day leaving the confines of Sanctuary is little more than a fading ember.
A mid-level systems operator, Ripley does his best to stay out of trouble. His best friend Felix, an irreverent half-breed shunned by society, can’t seem to do the same. When Felix’s family is targeted by an unjust law, there’s nowhere to run. The city of Sanctuary had once been a safe haven— now it has become a cage.
Ripley’s desperate attempt to help his friends escape tragedy uncovers a conspiracy that envelops the last refuge of mankind in an ever-tightening net.

The people of Sanctuary have never seen a sunrise.

If Ripley and Felix aren’t prepared to make the ultimate sacrifice, none of them ever will.

Are you an indie writer or author? Contact me to be featured in the Indie-Go Interviews!