I asked Mansu where he would like to interview:

On the Planet Aotomomus is a outdoor cafe. The cafe is Mokili Pasduro. I drink a cup of Rosafea tea. I brush away celery seed from my beige short sleeve velour shirt. A meteor hits the table. A barista descends from a cupboard of empty glasses in the kitchen. She changes into a robotic zebra mixed with possum and antelope genes. The cafe walls are covered with dried, seasoned rooster eggs and playpus skin, corduroy, pinto seeds.

Laura Mae enters the cafe in a gold silhouette hovercraft. Her hair blows left and right from the swirling helicopter blades from the ceiling. The cool air infuriates the manager. He chastises the barista for transforming during business hours. Laura sits and pulls up the interview questions from her phone. The barista and manager argue. Laura records the incident on her phone. The Aotomomus Police arrive in a robo airplane and arrest her violating intergalactic privacy laws.

Laura Mae: What inspired you to enter the world of writing?

Mansu Edwards: I wrote poems and submitted it to the Library of Congress. A vanity publisher contacted me about publishing a book. It didn’t work out. I decided to go indie and here I am today. Also, I always liked using my imagination. It was the perfect medium to express creative and innovative concepts. I have to thank God for my talents and guiding my steps through the writing world.

L: How long have you been writing for?

L: What are you currently working on?

M: I’m currently writing a superhero story. It takes place in a fictional town. As of now, the story is untitled. I’m also working on the final chapter of The Emojis Vs. Punctuation Mark series.

L: Are there any books or authors who inspire your work?

L: What has been the most challenging for you so far?

M: So far, my biggest challenge is choosing a story idea. I’ll have numerous concepts. Then, I have to decide which idea is the best. Or what story to release first because I have so many good ideas.

L: Besides writing, what is it you like to do?

M: I like to listen to music, watch videos and listen to podcasts.

L: What would you say is your favorite book or series of all time? Why?

M: My favorite series of all time is Encyclopedia Brown. I read E.B. when I was a child. He solved mysteries. It was an entertaining series, the titles and illustrations were cool. I tried to read as many Encyclopedia Brown books as I could. Btw, how many books are in the series?

L: Are there any regrets you have or anything you wish you knew sooner?

M: I don’t have any regrets. I feel that my mistakes and risk taking led me to my writing journey. Sometimes the circuitous route leads to self discovery and a amazing adventure.

L: In a brief statement, have you self-published or traditionally published? What was your experience?

M: I’m a self-published author. It’s fun. It’s time consuming. It’s rewarding. I didn’t have to worry about pleasing a Agent or Editor. I can experiment and innovate. I had to wear different hats (I still do). When I first started, I created the illustrations, then, I hired friends and Freelancers. It was mostly on the job training. I received tips and resources from strangers and the Internet. I sold books, received positive and negative feedback. I’ve taken everything in stride. I can’t please everyone. As long as I continue to grow as a Writer/Author then I’ll be fine. God got me.

L: What are you currently reading?

M: The Eye Of Minds.

L: What genre do you read?

L: What does a typical day of writing look like for you? Any rituals or ‘must-haves’?

M: I eat and drink (non-alcoholic beverages) before or during the writing process. I try not to force the story. I’ll go to the store, take a nap or do something else to take my mind off the story.

L: Any songs or type of music you need to listen to when you write?

L: What’s a word or phrase that people say that always irritates you?

M: “That sounds about right”. Either it’s right or it’s not.

L: Where would you say you get most of your inspiration?

M: I get most of my inspiration from life, the mundane and interesting aspects.

L: For aspiring writers out there, what would be the best advice you want them to know?

M: My best piece of advice is to experiment with different concepts and ideas. You never know what people will enjoy. Also, it prevents monotony and boredom. Have fun with experimentation. If it doesn’t work, it’s cool. You have more books in the future. Never look at it as a failure. Keep being creative and innovative. It’s the only way you’ll be remembered. 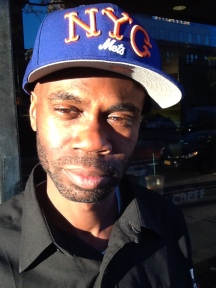 Mansu Edwards is a prolific artist who continually challenges art forms with boldness and creativity. He delights in using autonomous monikers to signify a transformative experience when engaging in innovative artistic creations. In 2016, Mr. Edwards produced, wrote and directed his first short film, “Texting In New York City”.

A work inspired from people’s responses to the street marketing of its paperback (text) edition. Later on in the year as a result of positive feedback from the Harlem Writer’s Group to the movie script, he is released a literary screenplay version of “Texting In New York City”. A film trailer would soon follow. Past works by Mr. Mansu include: The Disappearance Of Hate (2009), Mental Diet (2010, 2011), Biscuits And Yogurt Vol. 1 (2014), Texting In New York City (2014, 2016) and Exotic Ignorance: Ep. 8 Camouflage Pizza (2016), Emojis Vs. Punctuation Marks: Battle Of The Keyboard (2018) Emojis Vs. Punctuation Marks 2: Land Of Refrigeration (2018) and Can You Hold Please? (2018).

Plush Couches – On the way to a job interview, Rio Akuba experiences a critical and unsettling case of gas on the train after eating organic, Sweety Berry Bears distributed by two Brand Ambassadors in his Brooklyn neighborhood. The situation leads to ongoing confrontations during a subway commute. Rio must find a way to overcome his gas obstacles in order to arrive on time for a meeting with S&E Prism’s Ramona Thickarow and resist eviction from the home of adopted black parents, Anwar and Stephanie Akuba. Anwar Akuba is frustrated with Rio’s laziness and unsteady employment. He wants him to get a permanent job.

At the S&E interview, Rio accidentally discovers a secret sex chamber in the basement operated by Ramona Thickarow and Mrs. Taylor. In this hidden location, both women sleep with potential workers and chooses the best man based on his sexual performance. A young 20-something Intern, Petria asks to participate in the sex activities. She’s denied because of her youth and inexperience.

Meanwhile, Mrs. Taylor contracts a sexually transmitted disease from an Interviewee and believes it’ll jeopardize her relationship with Cleon, who’s having a secret relationship on the side. He’s infected and angrily accuses mistress, Wingzi, a Freelancer on a ’24/7 Hookup’ anonymous sex app. She fears the false STD claims will destroy her finances and ultimately her reputation in the online community. So, Wingzi asks Anwar Akuba, who she meets on ’24/7 Hookup’ to join her in a plot to kill Cleon.

Will Rio expose S&E Prism? Can Petria standby as Ramona and Mrs. Taylor enjoy sexual excitement without her? Is Anwar Akuba capable of killing Cleon to prove his love for Wingzi?

Are you an indie writer or author? Contact me to be featured in the Indie-Go Interviews!

We sweet old man potato boi 🤗
Weirdest. Mask. Ever.
Got the amazing news today that I will be participating in the Tucson Book Festival again this year. BUT this time it will be a 3 hour time slot and I believe I'll be able to actually talk about my experience as an indie author. I'm over the moon excited about this! 😁🥰
Potato in a pinch 🥔🤣